There are two U.S. Department of Veterans Affairs hospitals in Tennessee: one in Nashville the other in nearby Murfreesboro.

So when veterans from elsewhere in the state travel to either location for care, there’s always the problem of finding lodging for family.

Mr. Knowles, spokesman for the Middle Tennessee Fisher House Foundation Inc., is trying to do something about it.

The foundation recently was created to raise money to build a Fisher House – “homes away from home” for veterans’ families. Built by the nonprofit Fisher House Foundation of Maryland, 43 houeses have been constructed at military installations and VA medical centers in 16 states, plus one in Germany.

Families of veterans needing hospital care can stay free at a Fisher House for as long as they like, not unlike the Ronald McDonald House charity facilities across the country.

The foundation even has a frequent-flier mile donation program so relatives can get free flights if needed, he said.

“There’s such a big need,” he said. “A lot of people don’t realize there are over 650,000 veterans in the state of Tennessee alone. The Fisher House Foundation believes that families are good medicine (for wounded troops), and if you’re around family when you’re recuperating, you seem to recover a lot faster.”

The Middle Tennessee Fisher House Foundation has in its sights a 21-suite facility on land donated by the VA hospital in Murfreesboro. The project would cost $2 million, according to Bill Citelli, the foundation’s president and board chairman.

So far, organizers have raised about $300,000, Mr. Citelli, explaining that once they reach the $400,000 mark, the national Fisher House Foundation will do a site survey for the project.

When they raise all the money and house is built, it will be turned over to the VA for administration and maintenance, he said Mr. Citelli are pushing hard to raise awareness and funds across the state in hopes of breaking ground in 2010. They have yet to do much outreach in Chattanooga but said they hope to change that, since military families from this area could greatly benefit from the project. 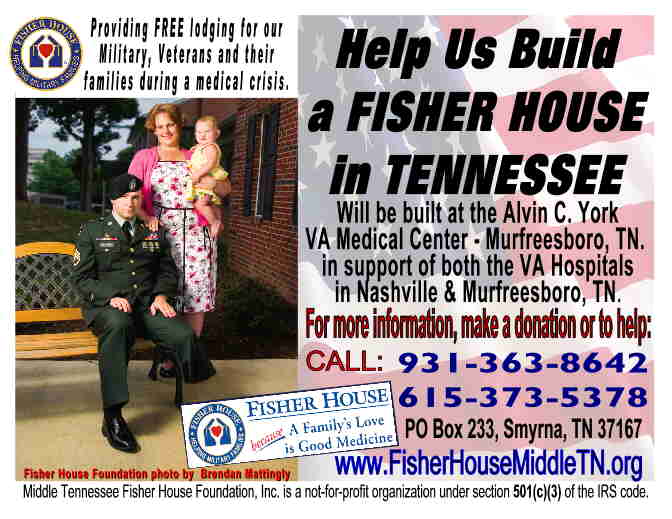